Listen to this song about John 3:16 in Hebrew, Korean, Arabic, Persian, Russian and English

John 3:16 is possibly the most quoted verse in the Bible and the best known, and it is not for less, since it tells us about what Christ has done on the cross and the great love that our heavenly Father has had for us.

There are different Christian songs that tell us about this great verse, but on this occasion one has been thought of that speaks of the message of this verse in six different languages, and for this different leaders from different countries have gathered to unite their voices to sing John 3:16.

One For Israel Ministry is the one who has been in charge of the production of this song. It has been sung in English by Eniola Abioye; in Hebrew by Keren Silver; in Korean by Kim Hyun; in Russian by Kim Jae Joong; Tanya Kadin sings it in Persian and Vahid Norouzi in Arabic.

Here we share this beautiful song composed by Sasha Atlas and produced and arranged from the city of Israel, by Maroun Beem: 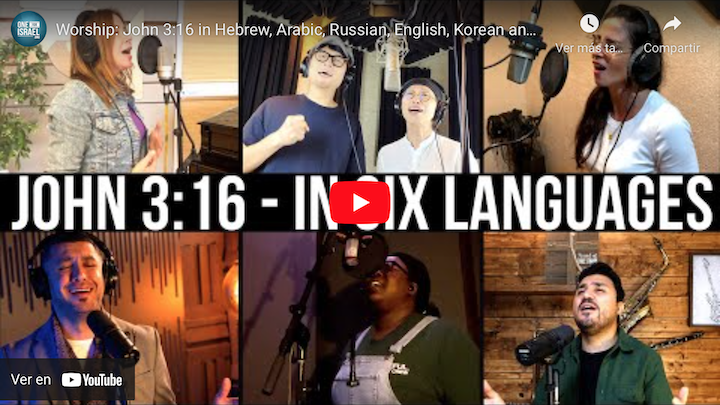 ...
5 and 7 year old girls sing "The Blessing" with their daddy and mommy
12-year-old girl sings the song "Hallelujah" in a spectacular way
Music