Warning against the new Barbie Yoga: “Satan is after children”

A new Barbie made by Mattel, the “Breathe with me” has aroused the concern of a Christian author.

Yasmeen Suri, Christian speaker and author of the books Beautiful Deception and The Fake God Reference Guide, was shopping at Target when she saw the doll, took a picture of it and shared the following message on Facebook: 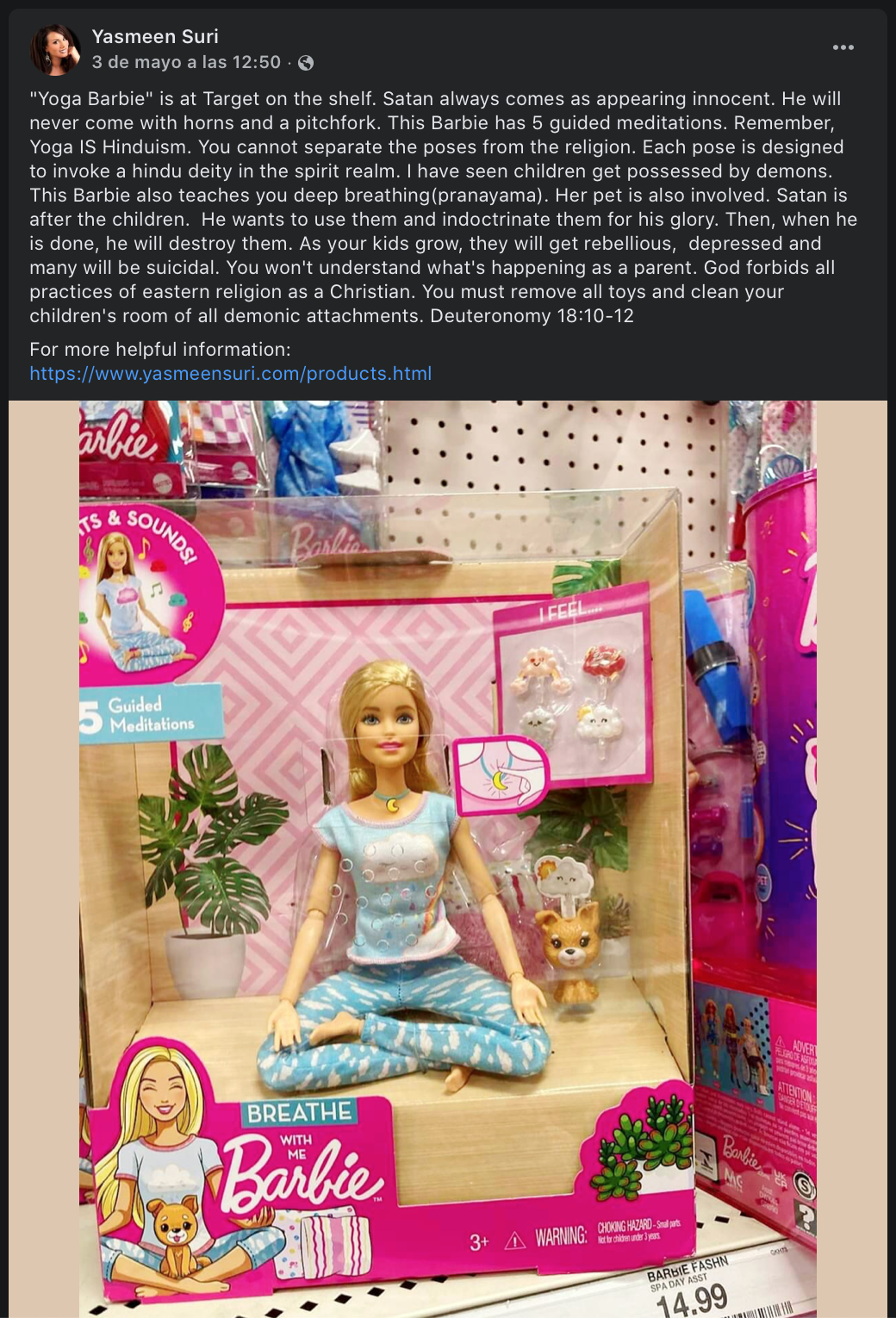 “Yoga Barbie” is at Target on the shelf. Satan always comes as appearing innocent. He will never come with horns and a pitchfork. This Barbie has 5 guided meditations. Remember, Yoga IS Hinduism. You cannot separate the poses from the religion. Each pose is designed to invoke a hindu deity in the spirit realm. I have seen children get possessed by demons. This Barbie also teaches you deep breathing(pranayama). Her pet is also involved. Satan is after the children. He wants to use them and indoctrinate them for his glory. Then, when he is done, he will destroy them. As your kids grow, they will get rebellious, depressed and many will be suicidal. You won’t understand what’s happening as a parent. God forbids all practices of eastern religion as a Christian. You must remove all toys and clean your children’s room of all demonic attachments. Deuteronomy 18:10-12

As you may have noticed in the previous image, the barbie comes with a yoga pose, that is, with her legs crossed and her hands palms up.

Yasmeen Suri says that the real intention is to involve children in satanic practices, since the product is intended for children 3 years and older, and satan never appears with horns and a pitchfork, rather he is presented in an innocent and that is the same way that Mattel presents Barbie Yoga:

This meditation-themed doll celebrates one of her favorite ways to recharge using lights and sounds: mindful meditation. The set comes with a Barbie doll, a puppy and four cloud emojis. Girls simply press the button on Barbie doll’s necklace to activate one of five guided meditation exercises that use light and sound effects to inspire their own practice.

Let’s take good care of our children, their education, the things they see, what they hear and the toys they hold in their hands. Remember that the Bible says: “Train up a child in the way he should go: and when he is old, he will not depart from it. (Proverbs 22:6).

...
"Glory to God" says Al Horford after moving on to the NBA Finals
News