Ana Garcia, is a Dominican woman who has faced perhaps the worst disease that has ever existed: cancer. This fighter saw her hopes go overboard, but as she says: “God is the one who has the word.” And now she is in a new stage of her life where she can testify to a large audience the greatness of God and give hope to other people who are having these kinds of struggles.

She has had the privilege of participating in one of the most prestigious stages in the world, this time at Dominicana’s Got Talent. Ana went to demonstrate her talent after a battle that she thought it would take all away from her.

She tearfully testified to the jury before singing all that she had experienced before the miracle of healing happened and from then her performance was moving. Ana herself performed the song “Al final” by the Dominican Christian singer Lilly Goodman and her participation moved the entire jury, she was even awarded the “gold button” that sent her directly to the semifinal of the competition. 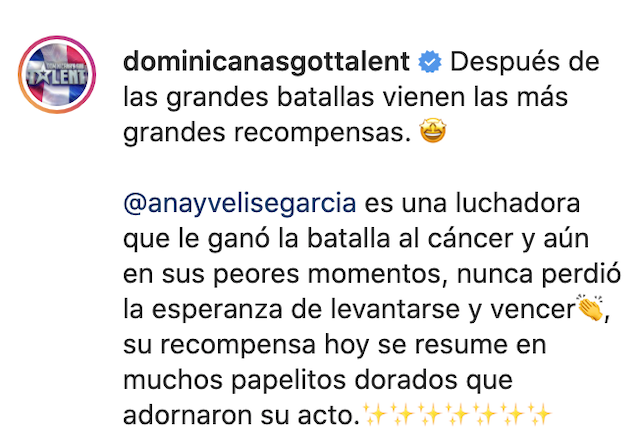 Many people today struggle with this disease or others that are serious as well. We hope that this story of Ana’s courage and faith touches the hearts of those people who are also suffering, who have faith in the Lord and who hope in His holy will.

...
This man plays the piano to praise God despite his disability
Accusations to deacon jailed for singing outdoors were dropped
Music, News