Racism is not a forgotten issue in the 21st century, but those flames were lit when Floyd was killed in broad daylight. Since then, the protests and social messages have not stopped, and in the midst of this revolt, the Christian singer Isadora Pompeo, who is accused of racism, is now involved.

This controversy in which the singer finds herself is due to a publication she made on social networks where she appears with braids and dark makeup, imitating the appearance of a black woman and this was not well seen by many people.

The artist was accused of “cultural appropriation”, a thesis that exhorts that some accessories, hairstyles and clothes should only be used by people who belong to its ethnic group.

Pompeo was accused of racism because the practice of changing skin color was used in the past by white actors to play black characters, making it difficult for actors of that ethnic to have opportunities in the artistic world.

The comments from the community were many. They even said that in this way the artist could steal opportunities from those people who say she is imitating.

Is Isadora white? While blacks suffer racism for wearing braids, for manifesting our culture, we are murdered for color, a white woman is applauded and seen as great! And she still dares to fill her face with a black leather base, thinking that being black is in fashion.

I make mistakes, but I will never stop learning out of pride. whom I have offended, forgive me. who understood me, thanks. who is angry with me, I get it. who I disrespected, it was never my intention. over you, be strong. about my color, I am what I am. I am not black, nor do I want to pose as one. I am not ignorant, I may have acted irresponsibly. I investigated, I looked for, I received support and criticism, but I have a conscience that does not condemn me and a Christ that does not throw stones at me. to those who never made mistakes, cast the first stone. With love, me. 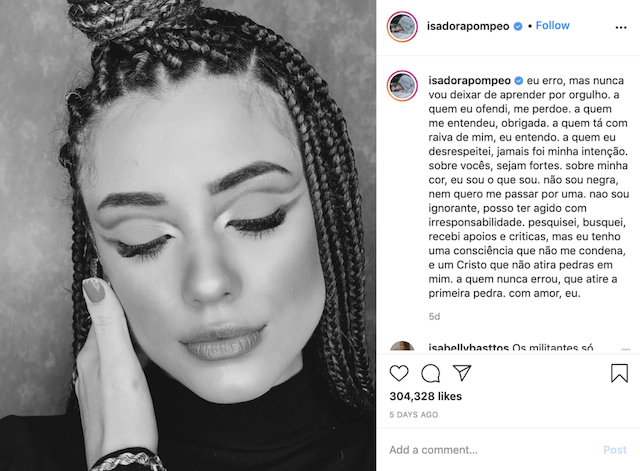 ...
Billie Eilish about her childhood: "I was super religious"
Churches can sing now, but outside
News