Franklin Graham, disappointed by JLo and Shakira’s participation in the Super Bowl

It is true that the NFL Super Bowl is not a Christian activity, but that does not mean that a child of God cannot give opinions about it. This time Mr. Franklin Graham raised his voice against the immorality that was shown to millions of children through Pepsi’s halftime show in the NFL super Bowl.

In addition to Graham, others have classified the participation of renowned singers JLo and Shakira as “toxic,” since in this presentation it shows our daughters that sexual exploitation is fine.

These are Graham’s words:

I don’t expect the world to act like the church, but our country has had a sense of moral decency on primetime television to protect children. We see that disappear before our eyes. It was shown tonight at the Pepsi halftime show in the Super Bowl, with millions of children watching. This exhibition was Pepsi showing young women that the sexual exploitation of women is fine. With the exploitation of women on the rise around the world, instead of lowering the standard, we as a society should increase it. I am disappointed with Pepsi and the NFL. 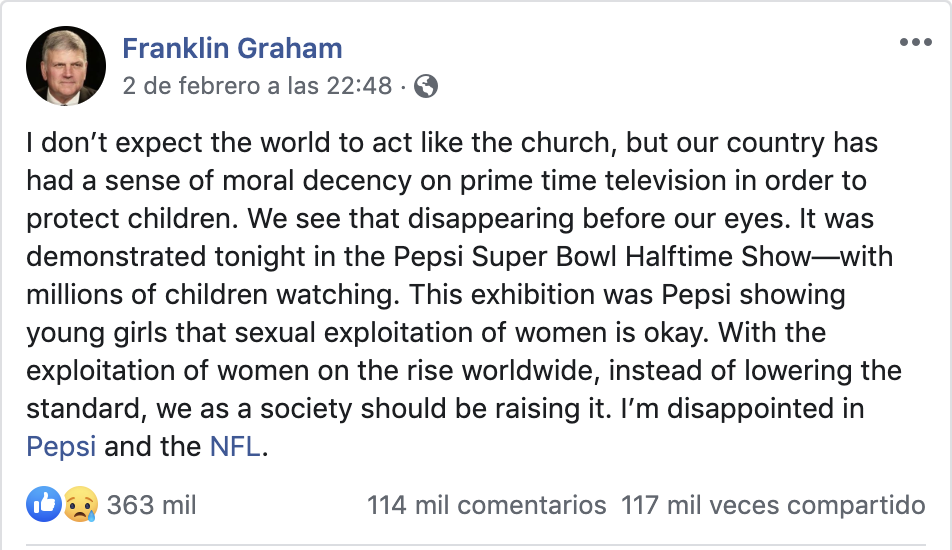 The Bible tells us that these times would be exactly like that, of moral decay, evil, etc. But this does not mean that we cannot be like a voice in the desert preaching to the vipers. It is our responsibility to be that instrument that seeks that in your country the level of spirituality and morality does not decline.